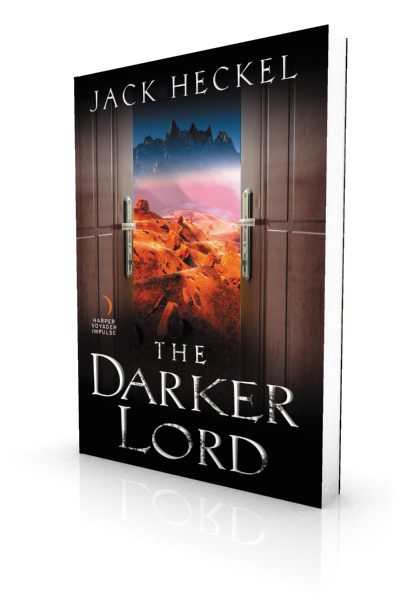 The second novel of Jack Heckel’s Mysterium series, The Darker Lord follows beleaguered former Dark Lord Avery Stewart as he is forced to take up his cloak and his Imp once again and travel the doors between realms in order to keep the fabric of the universe intact. More or less intact, anyway.

In The Dark Lord, Avery had an epiphany about the Mysterium. Only now he can’t remember what it was, no matter how much coffee he drinks or how many times he reads the novel published from his notes. What he does know is that he has become the most famous mage in the multiverse, and no one is happy with him. His fellow mages are upset at his rapid promotion, Dawn and Eldrin are tired of him spending his days on their couch watching bad TV, and Harold the Imp won’t talk to him.

Luckily, things can always get worse. And they do when the Administration’s enforcer, Moregoth, arrives at the first lecture of the semester to apprehend two of Avery’s new students for undoubtedly sinister reasons. In a fit of foolishness and heroism, Avery defies the university and flees with his friends into subworld. There, he reunites with his former allies from Trelari and thus begins a frantic race through the multiverse to escape Moregoth.

But as Avery’s amnesia begins to fade, he realizes his loss of memory is no accident, that he is caught in a conspiracy as terrifying as Mysterium University’s Student Records Building—and that his friends might not all be on his side.

Reviews of The Darker Lord

For anyone who enjoys the magic of Harry Potter, with a bit of Dungeons and Dragons, the Wizard of Oz and other fantasy writer's tossed together, this is the tale for you. Great creative fantasy book if you are a fantasy fan because it references other books, movies, and comic book characters.