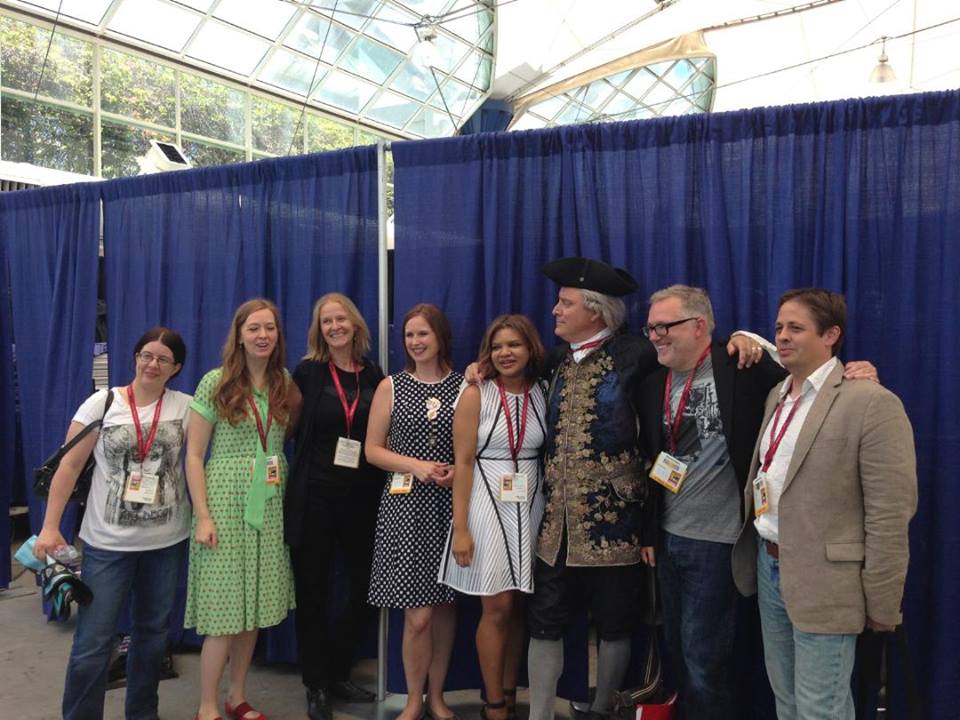 “My idea of good company is the company of clever, well-informed people who have a great deal of conversation; that is what I call good company.”
-Jane Austen

This last week, on Thursday, July 23rd, a date that will live fondly in my memory, I had two firsts. I attended my first ever San Diego Comic-Con (which is amazing given the general level of geek I have always embraced), and I was simultaneously on my first ever panel as an author. I could say something very poetic now about the experience, but I will leave that to Ms. Austen and merely say that it was incredible. I am going to be putting up a number of blog entries in the coming days exploring in detail some of the specific topics we discussed, but for now I want to give you my impressions of Comic-Con broadly, the audience for our panel more specifically, and my panelists.

I have been on panels before in other contexts, mostly wearing my hat as an intellectual property attorney, but those meetings rarely turn into true conversation—at least as Ms. Austen would define it. There is, I think, almost always the constraint of commerce that keeps people from being truly open about a subject. Also, it does not help that the subject of patents and trademarks and restraint of trade is generally rather dry and coma-inducing. Neither of these barriers to true conversation existed in our panel.

The tone was struck by our moderator, Shannon Hale, who channeled the irreverent spirit of Comic-Con to perfection. (How serious can you be when front row center you have a young woman dressed stunningly as Nurse Chapel, and who could not possibly have been born when Star Trek first aired.) Ms. Hale, author of the wildly popular Ever After High series of young adult and youth novels, informed the audience that the panel this year would not be to the death only because of the damned attorneys—you really can’t escape lawyer jokes if you are one, you just have to grin and admit that as a group we are pretty worthy of mockery. We then launched into what I can only describe (and admittedly this will sound a little poncy) as an incredibly free-flowing, but erudite conversation about the origin of fairy tales, what makes them so enduring, what inspired us to “remix” or “reconstruct” them, how we approached the task, and so on.
A moment on the audience, it was amazing. There were at least three hundred people (standing room only), and realize that next door Benedict Cumberbatch was holding forth in his gravelly, urbane, sexy British accent about being gravelly, urbane and sexy, so we had competition. Anyway, despite the competition, I would rate our audience against any at the Con. I have been to a lot of conferences in my professional capacity, and I have never been in a room with as many informed and engaged people. The questions the audience posed, like what elements make a story a “fairy tale”, were often more thought-provoking than those posed by our moderator.

My fellow panelists did not disappoint either. You had on stage Cornelia Funke, she of Inkheart and dozens of other titles, who could discuss writing fairytales from a multi-decade perspective, and who gave the best answer to the question, “How do you find magic in the modern world?, by answering (and I paraphrase here), “It is all around us. It is everywhere in this room. It is under your chairs.” Brilliant. There was Marrisa Meyer, the author of the Lunar Chronicles, who described the challenges of writing about both technology and fairytale at the same time. You had Ben Tripp, illustrator and author of the upcoming Accidental Highwayman novel, who happened to also be dressed as an 18th Century gentleman, who had the best quote of the night. When asked by a mother how she could help her daughter become an author he answered, “Forbid it.”

I must also mention that these storied authors, who were admittedly the reason for our packed room, could not have been more welcoming to a couple of first-timers. Katherine Harbour, author of Thorn Jack, and myself, as a very humble representative of saucy Jack Heckel of the soon to be released novel Once Upon a Rhyme (the first installment of the Charming Tales), both debut authors, were both welcomed by the group as equals. And this egalitarian spirit extended to the autograph session after the panel. I was proud to be sandwiched between Ms. Funke on my left and Ben Tripp on my right. Cornelia was busy the entire time signing and engaging with her fans, and Ben was nice enough, in his brief moments of respite, to show me the ropes of working behind the ropes at one of these events.

There really is something magical about being in a place with clever, well-informed people, who might be selling something (aren’t we all), but who also love the subject they are selling. That is what we had for that hour in San Diego. The best that I can say about Comic-Con is, despite its overwhelming size, and despite the quite reasonable critique that it has become incredibly commercial (the size of the Marvel booth was obscene), it brings together for a few days each year people who are truly passionate about storytelling, whether it is in the form of a movie, or a video game, or a comic, or even a humble book.

A post from John Peck, my Once Upon a Time co-author, on his experience at San Diego Comic-Con.