The Quest for the Pitchfork of Destiny 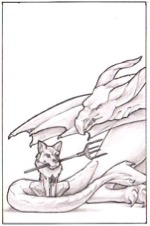 I’m pleased to announce to the world that Pitchfork of Destiny (available for pre-order on Amazon), Book 3 of the Charming Tales, has made it into the hands of our editors. We fell quiet during the first part of the year because we’ve been heads down dealing with what happens when the Great Dragon of the North, Volthraxus, soars down into the Kingdom of Royaume to discover that Magdela, the Great Wyrm of the South, has been vanquished.

There’s a lot to catch up with, so hopefully, everyone will see more posts in the days and weeks to come. The word count for Pitchfork of Destiny came in around 98,000 words, but it will likely end up around 80,000 once it’s been properly edited.

I want to thank everyone who participated in and commented on the Voyager Valentine contest. I’ve heard back from everyone (and gave out participation prizes to all) with the exception of my grand prize winner. So, if you commented and didn’t hear from us, please email. The contest is officially over, but we’ll do more.

So, one thing that happens quite a bit in the process of creating a Charming Tales novel is that lots of text gets cut and left on the virtual floor. I wanted to share a bit that didn’t make it to the editor, but gives a little preview of where Charming is at the beginning of Book 3.

Charming’s thoughts drifted back to the winter and the dinner they had enjoyed in Two Trees at the Boiled Hedgehog. Despite the institution’s terrible name, the night had started well. He recalled that had worn one of his favorite scarfs, a delightful shade of apricot. Despite his fine choice of neckwear, he hadn’t been able to escape a sense that his appearance wasn’t as flawless as it should have been. Without the Royal Tailor to advise him on fashion, Charming felt self-conscious.

Liz had seemed to be enjoying the dinner, and as she was talking about plans for the cottage, he had examined the color of his scarf with a hand mirror. She had cleared her throat a few times, and he had nodded and uttered some passive agreement even as he studied the contrast between his scarf and tunic in detail.

“Edward, you aren’t even listening to me.”

Charming kept one eye on his mirror. “My dear, I’m trying to enjoy the minstrels.”

She had grabbed the hand mirror and sighed. “I can’t believe you. I was talking and you can’t stop looking at yourself. How vain are you, Edward? You probably think this song is about you.”

She immediately stood and stormed out.

He had almost fallen out of his chair as he set off to pursue his wife, even as the minstrels finished their rendition of “Prince Charming to the Rescue.”

Once they were outside, he realized that her cheeks were flushed – never a good sign. He went down on a knee. “My lady…”

“Edward, I love you, but when are you ever going to learn some humility?”

She pressed a finger to his lips. “No, don’t start. I don’t want a long-winded speech or poetry or anything else. I want you to show me that you can understand humility. I need deeds, not words.”

“I would do whatever you’d like to show my humility. I could put away my scarf or perhaps wear a cut of hose that’s less manly.”

She folded her arms and pursed her lips. “What about a farm? Would you take care of animals or plow a field the way Will and I did?”

“I don’t know that I’d be any good at caring for animals, with the exception perhaps of a fine steed. However, I give you my word that I will plow a field for you.”

“Yes. I will be whatever you want me to be, dear Elizabeth.”

“Well, you certainly don’t have to plow a field. We don’t need to be farmers and besides, it’s not what you do. It would take me forever to teach you to be a farmer.”

“Nonetheless, I will prove myself to you in the Spring. I will handle everything. I insist.”

As he finished recalling the event, he realized that he hadn’t seen his hand mirror in quite some time.

The story changed slightly, but we should have a moment in Book 3 where the world will know what happens when the farmer formerly known as Prince Charming attempts to plow a field.

Oh, and there will definitely be a Dragon in Book 3.

Thanks for all the support! Sorry about the lack of blogs and I hope everyone enjoys the Spring.

An update from the world of Jack Heckel. Thanks for continuing to check my site and being patient as I work on the Charming Tales.