Once Upon a Time with… Liana Brooks! 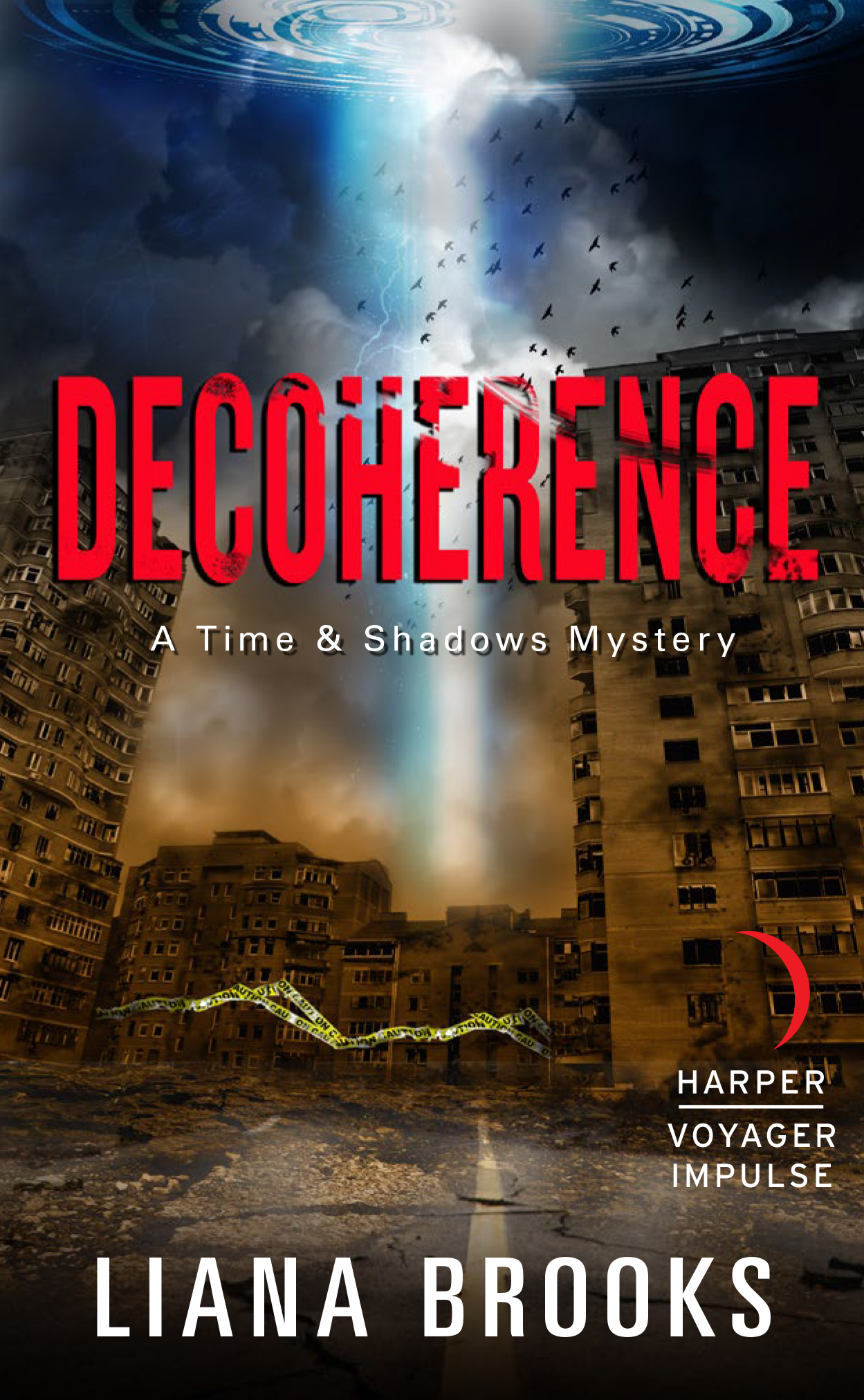 Hi everyone! Today we have a special guest, Liana Brooks, author of the Time & Shadows trilogy. She’s one of our fellow Harper Voyager Impulse authors, and her third book, DECOHERENCE, was released today (September 13, 2016) – please note the amazing cover to the left. Liana is a California native living in Alaska, and we hear she has a really big dog.

So, let’s get started. What’s your “Once Upon a Time”? Tell us about your beginning as an author. Where did you live and what inspired you to write?

Once upon a time, there was a strange, fair-haired child living just north of the Mexican border. Her family spoke Spanish, and they loved to read. They read the strange little girl books by JRR Tolkien and CS Lewis. They filled her head with dragons and heroines.

Day by day, the strange little girl grew darker, and taller, and stranger. Until at last she was a dark-haired teenager living high in the Rocky Mountains, wearing flannel and a chain, and filling notebooks with stories about fiery queens who tamed dragons and spaceships.

Eventually the strange girl became a strange woman (although she was living in Florida by that time and no one noticed). She studied algae and sharks, and after she graduated she found herself with two young children, no job, and a great deal too much time on her hands. So she began writing again. First about the magical queen. And then about shapeshifters in space. And then she typed up a curious tale of a woman who believes she might be a very illegal clone, and has to solve not only her own murder, but find out if she’s human at all.

That book became THE DAY BEFORE, and was published in May 2015.

Shapeshifters in space, clones and having to solve your own murder…we’re interested. Like you, we were also inspired by Tolkien and C.S. Lewis. So, in fairy tales, sometimes a fairy godmother can dreams come true. How did your dream of becoming a published author come true?

My fairy godmother is actually a fairy godfather, and he’s Canadian. True story.

Back in… 2009 or so? I think? Back when I lived in Alabama, I sent a short story around to some small publishing houses. I’d originally written EVEN VILLAINS FALL IN LOVE for an anthology, but it didn’t work out. So I polished it up, sent it out, and got nothing but rejections. After six months, when I was just about ready to pull the plug, I realized one small press hadn’t replied.

So I nudged them.

Three hours later I received an email from an apologetic Justyn who said he loved the story and was pushing it through to the acquisitions editor, and he was sorry I’d been lost in the spam folder. The next day, Breathless Press (alas, a now defunct small press) offered me a contract for the short story. Half way through editing, Justyn asked me if I had considered writing more books for the series. So I did.

While I was working on the third Even Villains story, I told Justyn about my novel. He (along with my fabulous critique group and beta readers) encouraged me to query agents. I did, and a very long time later (querying takes forever!) I signed with Marlene Stringer.

We completely understand about the querying as our quest for an agent continues to this day. Well done. Now, no story would be complete without an adversary. What’s your biggest nemesis… fear, doubt, a mortgage, time, ice cream? What tactics, allies or weapons do you use to win those battles?

My greatest nemesis is self-doubt. Always, always, always. I have, what, ten published titles now? Something like that. I have three novels from a major New York publisher and I still wonder if I’m a Real Author™. Self-doubt is a crippling bastard and the only thing you can do is kick in the balls and keep writing. So I suck? Fine. I suck. I’m still writing and I will keep writing and editing until I don’t suck.

My biggest obstacle is being a fulltime parent with four children at home, and one who isn’t in school yet. I started writing when my oldest two were 2 and 4. They went to bed around 8 and slept for twelve hours straight. My husband worked from 4:30 in the morning to 11 at night. We had one car, and he had it. So I was stuck in the house, all day, with two small children and I was losing my mind.

Writing gave me not only an escape, but a way of feeling like I’d accomplished something when the floor was still sticky after I mopped it five times. 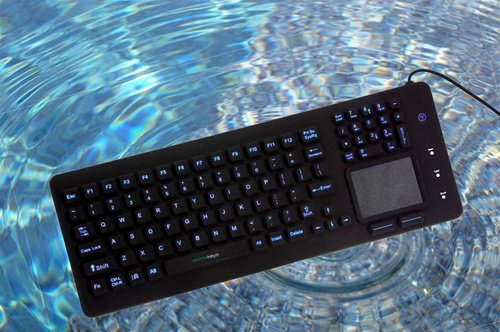 Waterproof keyboard – What every writer needs!

Now the kids are older, my husband doesn’t work such long shifts, and I still write. But I fit the writing between their needs. I’m still a stay-at-home parent. I drive carpool. I volunteer at the pre-school. I take kids to the dentist. And I make the time to write. It’s a matter of making the time, having a waterproof keyboard at home, and having a folding keyboard in the car so you can write 500 words while you’re waiting for the kids to get out of school.

As we all know, the hero can’t ultimately triumph without a few defeats along the way. Can you share a defeat that you suffered in your writing career and what you learned from it?

Remember how I said THE DAY BEFORE was on query for a long time? It was out for about 18 months and read and rejected by lots of agents. When Marlene read the full she asked me to do an R&R (revise and resubmit); specifically, she asked me to take out Sam’s then-fiancé.

I had to take out an entire major character, rewrite huge chunks of the book, and really rethink who Sam was and what her relationship with Mac could be without the artificial barrier in the way. I wasn’t sure it would work… but I tried it. And it turned out amazing. Some of the best scenes in THE DAY BEFORE were written for that R&R to replace scenes with Joe. The graveyard scene at the end, where Mac is doing everything, that didn’t exist in the first *cough twenty cough* drafts.

It was a challenge and a setback, but ultimately, it turned into something wonderful.

Aha! You snatched victory from the jaws of defeat (after lots of drafts). Well done! That’s pretty awesome, but what’s your greatest victory as a writer?

The origin story for the Time & Shadows series is really a series of happy accidents. I did the R&R for Marlene, and then a few weeks after I signed with her she called me and told me she had an editor interested in THE DAY BEFORE. I’d been expecting to wait for months, and it took her less than two.

We talked, she talked to the editor, and the last thing I’d heard was the proposal for a two-book deal, with an option for a third. I thought that’s what I was getting and I was happy with it.

And then I was somewhere… probably at gymnastics with the kids, when an agent I’d followed for years tweeted me and congratulated me! Several others chimed in. “So happy for you! Just read the Publisher’s Weekly announcement! Great deal!”

I finally got one of them to send me a screen shot, and there it was THREE-BOOK DEAL. Marlene had made miracles happen, and the whole trilogy was under contract (which was the best news because I wasn’t sure I could fit the plot into two books).

Brilliant! Where do you see yourself today? What’s happening in this chapter of your career? What are your current projects and what can we look forward to in the next year?

My next project is a SFR novella titled BODIES IN MOTION, and that will be released by the micropress Amy Laurens and I set up for ourselves after hitting some setbacks with small presses.

My followers on Twitter know I’ve been teasing a new novel titled FREE FALL that is going to Marlene (hopefully is with Marlene by the time you read this). And then I have the next Heroes & Villains novella to write for publication this time next year. That book is a couple years late because it was originally slotted for a small press and between one thing and another it wound up in rewrite limbo.

Next year is going to be the year of the novella, possibly the year I announce a new book deal (although it would be awesome to announce that in 2016), and hopefully, 2017 will be the year I move out of Alaska because I really don’t like the winters here.

My happily ever after involves a writing career that spans decades and pays for my kids to go to college and become the people they want to be. In forty years I’d love to be sitting in my writing study, windows open, looking over a small herb garden with the sound of ocean waves in the distance. … and I’d really like to get a species of animal named after me. A shark would be awesome, but I will accept creatures that are not apex predators. 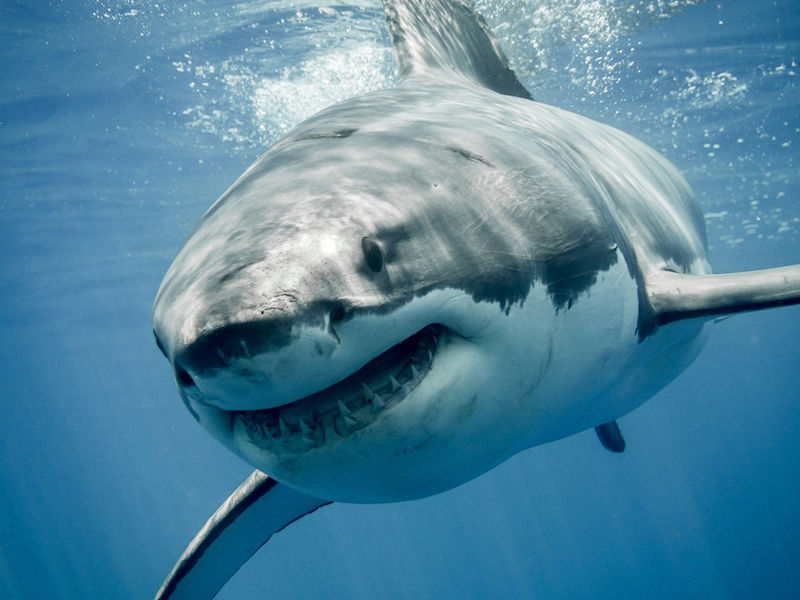 Help Liana have this shark named after her!

This is, coincidentally, also my husband’s Happily Ever After. His goal is for me to write so many books he can retire from his current job and become my full-time, dedicated arm candy. He asks that you please support his retirement fund and buy all my books.

Okay, everyone. We have our mission. Buy all of Liana’s books, so we can have a Liana shark. Here’s hoping those dreams come true. So, for everyone hoping to be an author, what advice would you give them?

The only good advice I can give aspiring authors is the same advice a good friend gave me ten years ago: PUT YOUR BUTT IN THE CHAIR AND WRITE.

I have a website, www.lianabrooks.com, but honestly? Check Twitter first. If I’m not on their 18 hours a day people will send me emails asking if I’ve died. If I am within the range of a wifi tower, I am on Twitter. If you don’t like Twitter, I have Facebook, an Amazon Author Page, and a GoodReads profile.

Come find me, chat, ask me questions, send me pictures of sharks, it’s all good. 🙂

Thank you, Liana! And congratulations on the release of Decoherence! Here’s a look at the whole trilogy. Remember, a shark’s name depends on you! 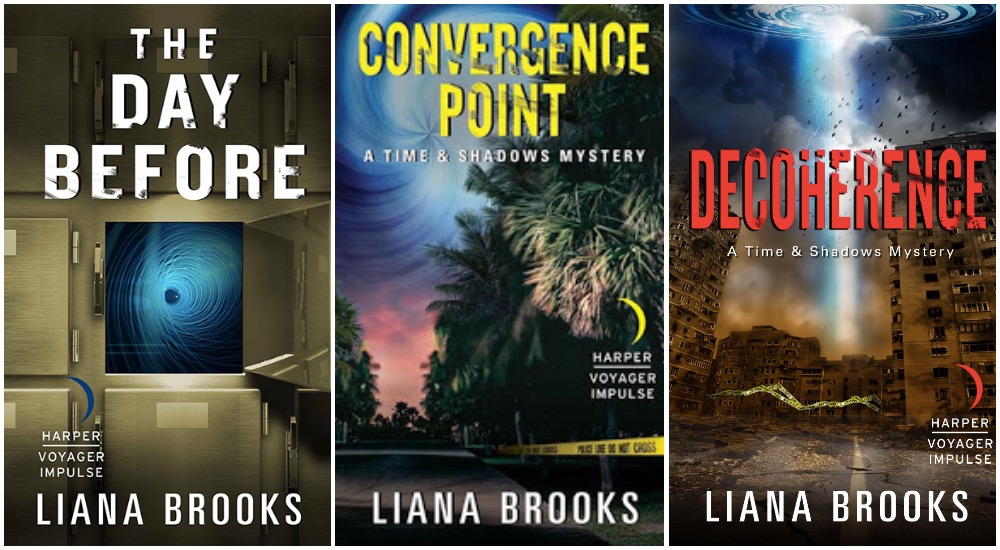 Reblogged this on Wag 'n Bietjie.