Days 4-6: Life, The Universe and Everything 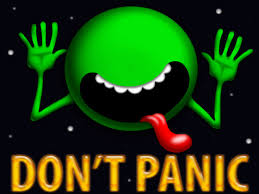 This blog entry is entitled “Life, The Universe and Everything” because sometimes it seems as though all three of those conspire against our better intentions. Take this blog. Our intention was to count down the days to the release of The Darkest Lord (as a reminder that is 2/26 for the ebook) with a blog entry every day. We made it 3 days before life, the universe and everything interceded. On the whole that isn’t a bad stretch, but hardly what we had hoped. So, today we will make it up by putting three blog entries in one to cover days 4 to 6.

Let me start with…

On Day 3 we blogged about writing as a team, and I urge you to read that entry as it is quite good. One of the questions we most often get about writing as a team is how we come up with our ideas. There seems to be a belief for many that coming up with good story ideas is a challenge. In fact, that is the easiest part. There are a dozen story ideas we want to publish as Jack (check in on our Future Stories page as we will be putting more and more content there as we move past the publication of The Darkest Lord), and each of Jack’s parts have another dozen that don’t really fit Jack’s style that we would like to do on our own.

Ideas we have, but time we don’t. That is probably the biggest challenge we face in coming up with new content. Time. I know this will come as a surprise to many, but Jack’s scribblings do not, in and of themselves, keep the lights on. This means that both of Jack’s halves must, for now, keep their day jobs. In turn this means that Jack is primarily a  night and weekends creation. I know this is not a situation unique to Jack, and to some extent Jack has a secret power, namely that he has two heads and pairs of hands to write with, still it does mean that life can and does intervene now and then. And so, if at times we go silent and the site grows dusty know that life has happened once again. What a blessing.

Oh, and if you really want to goose us into putting something up try emailing us. I swear it works every time.

Which naturally leads me to…

One thing that does not work every time is the website itself. You all may have noticed that there was a bit of a muddle with the links to the Day 3 blog post when they were propagated through Jack’s extensive media empire. It turns out that one half of Jack (the West coast half) is a bit of a dunce when it comes to computer technology. While one might find this fact odd as he once custom built his own computers while in graduate school,  it is a fact. Let us, perhaps over generously, put it down to the age old premise of “use it or lose it”. This is all in way of preamble to say that the website (which he had a hand in creating) may have a few bugs in it that we need to work out. Know that we are working on those issues, and as they say at the airport “If you see something say something.” Criticism, constructive or otherwise, is always welcome. And often results in gifts.

Which inevitably segues into…

As you know, in the VERY FIRST POST of the countdown we offered gifts galore! Well, those gifts are now moving over land and over sea to our first recipients. (You know who you are, or should as we have exchanged emails by now.) If you had fallen into a pit of despair over having missed out on your chance to collect some free stuff from old Jack all we can say is never fear! Continue to engage with the site or our other social media accounts by commenting, sending us emails, reviewing our books (and telling us about it), or signing up for our newsletter. We promise your engagement means EVERYTHING to us!